In 2016, Burundi continued to face a fragile security situation. EU measures under Article 96 of the Cotonou treaty remained in place, as well as various bilateral measures, including the suspension of co-operation with Burundi's police and army within the Netherlands Security Sector Development programme. International mediation efforts under the auspices of the EAC did not yield the desired results, as the government continued to exclude key opposition figures from the dialogue. The human rights and economic situation further deteriorated. The number of refugees from Burundi (450,000) and internally displaced people (100,000) increased. The general level of public services (health, education, agriculture) declined considerably. Part of the Dutch development co-operation programme continued, directly benefiting the population. Despite the crisis, good results were achieved in the areas of food security and sexual and reproductive health. Under difficult conditions, support continued for the preservation of media organisations and building the capacity of (N)GOs working on human rights and rule of law. 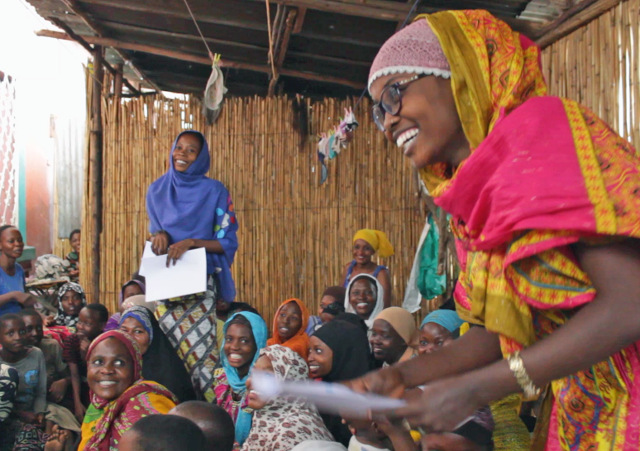 One of the most promising results is the agricultural extension programme with its Plan Intégré Paysans (PIP) approach, which facilitated a tripling of farming families' incomes while creating and increasing perspectives for future development opportunities, enabling the existing vicious circle to be broken. The approach encourages a transition to communities planning and deciding their own development objectives. This approach opens the door to further integration with other programmes funded by the embassy and the ministry, in SRHR/ family planning, rule of law and private sector development, as well as with a variety of other programmes. It also makes it possible to deal with issues such as gender, climate, environment, youth and inclusive development more effectively. Besides increased income, hundreds of families indicated that decisions were taken in favour of renewed community development efforts, while migration for labour, assistance or rebellion diminished or even reversed (some youths and adults came back to their villages). In this way, the embassy effectively supports the population in becoming more resilient to instability. With regards to SRHR the following [link] images [link] give an impression of the activities that have been supported by the embassy.

Key results of the embassy in Burundi

The number of students receiving one hot meal per day at school increased as a result of the WFP's expansion plan for the 'purchase for production' project. The school meals programme was largely successful. In 2016, the number of children enrolled increased compared to 2015. In all assisted schools, the average enrolment rate for boys and girls increased by around 5%. The proportion was almost the same for boys and girls. The ongoing crisis in the country, coupled with a disastrous agricultural season, caused the rate of malnutrition (chronic and severe) to rise again. This shows the fragility of the (agricultural, governance) system as a whole and demands appropriate responses to establish more resilience at different levels.

Apart from helping farmers to increase their production, the Netherlands' support also focuses on supporting farmers in making more sustainable use of their land. This indicator shows that since 2016 the first results are becoming visible. This is a qualitative assessment based on active interaction with the beneficiaries of the value chain development programme. This project started during the crisis and has positively affected some of the value chains. However, neither the number of hectares ecologically improved nor farmland restored through the PAPAB programme are yet included. This requires further qualitative analyses, which will be part of a mid-term review in 2018.

Sexual and Reproductive Health and Rights

At the national level, there is improved access to and increased acceptance of vasectomies and tubal ligations, with more than 1,330 procedures performed and a minimum of two medical professionals trained per referral hospital (nationwide). Availability and access to post-abortion care is also increasing, with 409 cases managed (despite this service provision ending in 2015, meaning that all abortion procedures were carried out clandestinely). SRHR commodities are available, with 1,060 new kiosks selling subsidised condoms, bringing the total number of kiosks to more than 5,000. Since the embassy started supporting the programme in 2013, national contraceptive use has risen by 5%, compared to 3% in previous years (2011-2012). An economic empowerment mechanism has been put in place to address girls and women's basic needs and increase their self-esteem. This has resulted in better decision making on the use of modern contraceptives. Dutch-funded radio drama series have contributed to a positive behavioural change to make use of SRHR services. This is reflected in a successful impact on the reduction of the fertility rate, from 6.4 children per woman (2010) to 5.5 (2016).

Schools and health centres are collaborating to offer quality (info and) services to young people, to address teenage pregnancy. In 2016 an extra, 307 (20.8%) out 1475 schools in the country benifitted from the approach. In addition, 111 new youth-friendly centres were supported and equipped (bringing the total to 313 of the 520 targeted health centers). The availability of 141 master trainers (115 newly trained) in the World Starts With Me (WSWM) programme indicates a positive introduction of Comprehensive Sexuality Education in the country. The adolescent birth rate decreased from 11% (2011) to 8% in 2016.

As part of the Security Sector Development (SSD) programme's Governance pillar, several institutions were supported in improving their capacity to monitor conduct and procedures within the police and the army. These included the Ombudsman, the Court of Auditors, the Independent Human Rights Commission (CNIDH) and the parliament. In 2016, the Burundian government suspended co-operation within this programme. This coincided with the deterioration of the political situation in Burundi, the closure of political space and the increase in human rights violations reported. Despite the closure of the SSD programme, the embassy continues to work with vital public institutions and NGOs on the broader topic of Rule of Law.

As a long-term partner of media organisations in Burundi, the Dutch embassy continued to support their work in disseminating information to the public despite the challenging circumstances in the country. Since 2015, many media organisations have been forced to relocate abroad. Some media offices were attacked and/or burned down. To preserve the Burundian media landscape, the Netherlands continues to support the ongoing operation of various media.

The School of Democracy organises training for local community leaders from very diverse backgrounds, to increase their awareness of democratic practices and improve their leadership skills, but also to establish trust between leaders from different organisational backgrounds, which do not always engage directly or easily with each other. Participants include local political party members, civil society, police and youth, among others. Fifty-two of the participants were newly elected to local government during the 2015 elections and continue to participate in local governance.

Interpretation of the results in context

Despite a lack of constructive involvement by the Burundi government, results in food security and SRHR are good. This is striking, considering the deterioration of the general economic situation, the tense relationship between the government and bilateral donors and an increasing dependency on humanitarian assistance. Some programmes (e.g. with WFP) clearly helped to prevent a slide back to a humanitarian crisis. The agricultural extension programme has so far shown the best results, in various cases even better than anticipated, despite the unfavourable conditions. Progress on security and rule of law is difficult to achieve in the current Burundian context, with government restrictions on political freedom and lack of respect for basic legal obligations. The SSD programme came to a halt. On media, advocacy and human rights, the programmes helped to preserve a certain level of freedom of opinion in the country, which is a valuable result. The SRHR programmes continued as planned, but several components needed adjustments to address emerging needs, due to the current political environment and the less favourable socio-economic situation negatively impacting the health and wellbeing of women and girls. For example, to address the limited access to SRHR services due to lack of security, means of transport were provided to health workers to enable them to carry out SRHR services in communities.

Glimpse into the future

As Burundi remains one of the most vulnerable countries in the world, continued Dutch involvement in the country is advisable, despite the continued negativity of the political, security and economic outlook. The Dutch approach will be to work along three axes: resolution of the political crisis through diplomatic efforts to support inclusive (regional-led) dialogue; support for the development of the country and improving the resilience of the population to political, economic and demographic challenges (e.g. by assisting them to become more independent from aid); and the protection of human rights and the improvement of governance. Additionally, synergies will be sought between these three axes in order to increase impact. A flexible Dutch development strategy and active political involvement could help to influence national policies and make development more efficient and sustainable. The embassy plans to capitalise on the results achieved in 2016. A specific challenge is to further involve the private sector, particularly in the area of food and nutrition security. Investors are hesitant, due to the difficult context, but some good and promising examples in several sub-sectors were observed in 2016. With regard to SRHR, the embassy will continue its present engagement, taking the necessary measures to continue delivering SRHR commodities and services that are accessible to the target groups, especially women and girls.